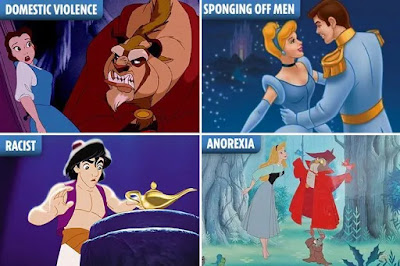 Whether it's the old classics or the newest blockbuster, Disney films have been a huge part of children's lives for generations.

But according to experts some of the older movies many of us grew up with could actually be extremely harmful to our little ones.

Many believe films such as Snow White, Sleeping Beauty and Lion King could promote unhealthy body image, gold diggers and even racism and domestic abuse.

According to Dr Victoria Cann, a Humanities lecturer at the University of East Anglia, Beauty and the Beast is by far the "most dangerous" Disney film.


She claims it's a case of Stockholm Syndrome, telling the Sun : "This is the most dangerous because the Beast always feels on the verge of violence.

"It also gives the unnerving idea that if a woman perseveres long enough, she can change an angry partner.

"At the end, the beast then turns into this blonde-haired white man for another happy ever after, giving the idea that now he's good looking, he can’t possibly be angry or threatening."

She points out that all the "good" characters, including Aladdin, have pale skin, while the baddies have darker skin.

She says this same approach is used in the Lion King, with evil Scar much darker than the rest of the characters.

She says the film portrays women as helpless characters who just have to wait around for a man to come and sweep them off their feet.

They also believe Sleeping Beauty promotes anorexia as her character has an impossibly thin waist.

As with Snow White, they also talk about the issue of consent as both films show the woman being kissed with a man while she is asleep.

However the experts praise the more recent films, such as Frozen, which feature much more modern themes including friendship, family loyalty and feminism.
- April 10, 2019