Kim Kardashian Negotiates with White House To Free Another Prisoner 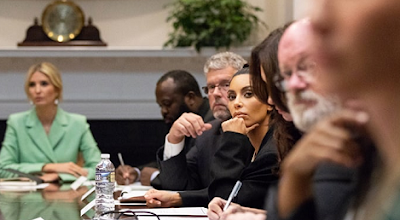 Kim Kardashian’s work to get Alice Marie Johnson out of prison left her inspired to help others and she’s zeroed in on the next felon she hopes to free.

On Wednesday, Kardashian visited the White House for the second time to join a listening session about prison reform and the clemency process, according to a statement from the White House.

The trip comes just hours after the Keeping Up With the Kardashians star’s interview on Jason Flom’s Wrongful Conviction podcast was released, in which she talked about her new quest to help an inmate named Chris Young.

During the conversation, the reality star, said she’s been talking to Young, a 30-year-old Tennessee native who was sentenced to life in prison without parole for a 2010 drug arrest due to mandatory sentences, in hopes of having his sentence commuted.

“His prior conviction to get him to his three strikes was marijuana, and then marijuana with less than half a gram of cocaine possession.”

Kardashian continued, “I was on the phone with the judge that sentenced him to life who resigned because he had never been on the side of having to do something so unfair,” referring to former Tennessee Judge Kevin Sharp.

“Now he is fighting [alongside] us to get [Young] out. … It was a mandatory sentence [Sharp] had to deliver, and he knew it was so wrong. And he was like, ‘I’m going to make this right. I’m going to step down, and I’m going to fight to help get him out.”

Kardashian said she really “connected” with Young, who has had a “perfect record” in prison. She said he worries about being dragged into trouble being housed in a maximum security prison where there is violence on a daily basis.

At another point in the interview, Kardashian referenced Cyntoia Brown, a trafficking victim serving a life sentence for murder, saying she had been reading up about her. She also talked about Kevin Cooper’s case.

Kardashian’s passion for prison reform is clear in the hour-long interview.

She talks more about helping to pardon Johnson in June and learning that there are “probably 3,000 Alices” out there - people serving life terms for nonviolent drug-related charges. So she says she’s been doing research, including visiting a women’s prison in California in July.
- September 06, 2018