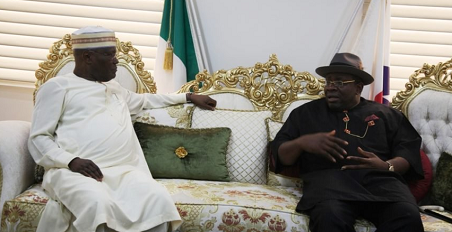 Former Vice President Atiku Abubakar has bemoaned the prevalent cases of cancer in the country and pledged to partner Gov. Seriake Dickson of Bayelsa on the establishment of a cancer centre in the state.

Abubakar made the pledge in an interview with newsmen on Wednesday in Yenagoa, shortly after his condolence visit to Dickson’s family in Toru-Orua, Sagbama Local Government Area.

Abubakar, who is one of the presidential aspirants under the Peoples Democratic Party (PDP), described Dickson’s initiative as commendable.


He stressed that the foundation, when fully launched, would help cancer patients since early detection is critical to its treatment.

The News Agency of Nigeria (NAN) recalls that the cancer foundation was established in honour of Dickson’s mother, Mrs Goldcoast who died on Aug. 8 at aged 72.

“The cancer centre is an extremely commendable initiative. I assure the governor that I will also join him in this cancer centre development because at the same time that he lost his mother, I also lost my sister-in-law to cancer.

“So, you can see that cancer has become very common in Nigeria.

“You know the best way to treat cancer is to see how we can prevent it by detecting it in time. And I want to be part of that initiative,” Abubakar said.

Responding, Dickson said that the cancer advocacy was initiated by to honour his mother.

“Since the passing of my mother, Mrs Goldcoast Dickson, my family has become campaigners against cancer.

“One of the decisions that we have taken as a family is to talk to well-meaning people like you and others to see how we can mobilise support for the establishment of a cancer centre in her name.

“We don’t want it to be government-driven but any government can make donations to it.

“It will be affiliated to tertiary institutions and will be maintained by the Henry Seriake Foundation,” the governor said.
- September 06, 2018