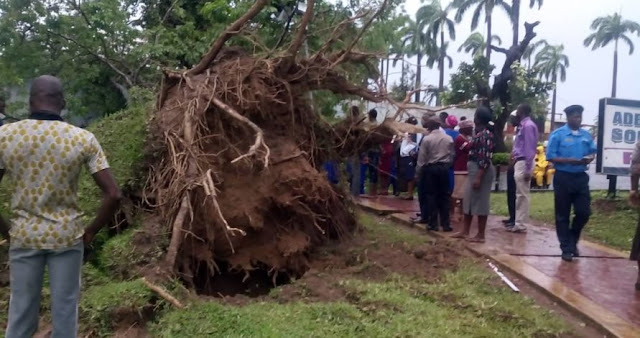 Residents of Moremi, Makama, and Fagunwa Halls, University of Lagos (UNILAG), were severely affected by the recent rainstorm that hit the school after roofs and walls of the hostel buildings came off.

The storm which began in the early hours of Tuesday morning had roofing sheets flying off after a deafening wind briefly swept through the school.

The wall that separates Fagunwa hall from the marshes outside it also collapsed.

Narrating her experience, a resident of Moremi, Aniebietabasi Ufia, said it was very scary.

“It was scary. Initially I didn’t think it was something serious until people in my hostel started screaming.

“I ran out and saw zinc sheets in the air like nylon bags, the wind carried fire about, basins and buckets were tossed about like feathers. It was a frightful experience”, she said.

No student appeared to be hurt as many of them took to their whatsapp status to share the story as it developed.

Meanwhile, the Vice Chancellor of UNILAG, Professor Toyin Ogundipe, was reported to be seen on ground with unidentified management staffers to access the situation and show solidarity with the affected students.

Elsewhere in the school, a tree fell on a car parked outside of the Senate building, but no one was reported to be hurt at the time of filing this report.

Trees and tree branches also fell in front of the department of Mass Communication, causing a mild obstruction at the gate and driveway that leads to the department.

The Nation reports that canopies set up for UNILAG’s convocation exhibition were scattered around, too. 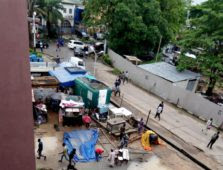 It is yet unclear whether the exhibition will still hold, but the storm has certainly disrupted activities in the school.
- May 10, 2018