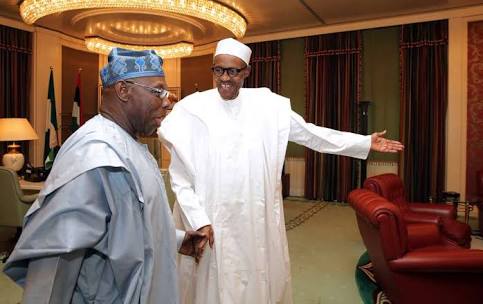 President Muhammadu Buhari raised a poser yesterday for former President Olusegun Obasanjo: where is the fruit of your administration’s $16 billion expenditure on power?

Although the President did not specifically mention Obasanjo’s name, what he said was a direct reference to Obasanjo’s tenure and the controversial expenditure.

Buhari said: “I have to repeat what I want the public to know here. Some of you may not have heard it. Either there is no power in your place or even on the television.

“I said and I challenge anybody to check from Europe, Asia and America. Between 1999 and 2014, Nigeria was getting 2.1 million barrels per day and average cost of 100 American dollars per barrel. It went up to $143.

“So Nigeria was earning 2.1 million times 100 times 16 years seven days a week. When we came, it collapsed to $37-38 and it was oscillating between 40 and 54, sometimes. I went to the Governor of Central Bank, thank goodness I did not sack him, he is still there. I went with my cap in my hand and said oya. He said there was no savings, only debt.

“And you know more than I do the condition of the roads and some of them were not repaired since PTF days. No matter what opinion you have about Abacha, I agreed to work with him and the PTF road we did from here to Port Harcourt, to Onitsha, to Benin and so on.

”On top of other things in the institution, education, medical care and so on. You know the rail was killed and one of the former Heads of State between that time was bragging that he spent more than 16 billion American dollars (not Naira) on power. Where is the power? Where is the power?

”And now we have to pay the debts and this year and last year’s budget I took to the National Assembly was the highest in capital projects: more than N1.3 trillion. Let anybody come and confront me publicly in the National Assembly. What have they been doing? Some of them have been there for 10 years. What have they been doing?

“So, really this country luckily for me I said it about eight years, that we have no other country than Nigeria, we should remain here and salvage it together – no matter what you have outside.

”Now, we get some of the people with houses here and may be in Abuja or somewhere in America and Europe, they swear some of them to God that it doesn’t belong to them. But we traced their accounts, through the banks, through their companies, it is their own. But they say it’s not their own. This is a terrible time and the people are saying what are we doing? Why can’t you lock them up?

”And again I went on by telling them, I said when I was in uniform, younger and rather ruthless, I got from the President downward I locked them up in Kirikiri. I said ‘you’re guilty except you prove yourselves innocent’.

”I myself was locked up and those who misappropriated public funds were given back what they had taken away. Who did anything about it? Then I decided to come and put agbada. I tried one, two, three, four times. God agreed. And the third time I came and met a statesman outside the Supreme Court. My chief lawyer was Mike Ahamba, Roman Catholic and Ibo man.

”He had witnessed in the box and asked the panel of judges that they should check on certain constituencies in certain states to bring us our register so that we can prove that the people that voted there were the people INEC submitted.

”Another Ibo man, a Roman Catholic, he said that this is what happened. He was among the panel of the judges, he wrote a minority report in my favour. So, why this question of religion and ethnicity and so on? People are worshipping the dollars, the Sterling, not to even talk of the Naira.

“He wrote a minority report, saying this is what we have decided. But the President of that court was my classmate for six years in secondary school; he is from my own state. So, please, we have nothing to regret. Absolutely nothing. Since we all believe that God works in our hearts, not in our talking. God help us, God help our children and grandchildren. We will try as much as we can to work and bring this country to its senses.

”God has given Nigeria everything; we are rich in human and material resources that let us keep praying to God that He should put people of conscience in charge at all levels.

”Sometimes, I wonder those who can afford to educate their children are to go overseas and train, America, Europe, Asia and so on. And they continue sometimes in the economy. I wonder what kind of Nigerians they want their children to come and work with.

”I think there is a lot of lack of imagination. Because if you’re fighting for the country then you shouldn’t be misappropriating or misapplying the fund the way people do.”

Thanking the group, Buhari noted that nobody was paying them for what they had been doing.

”It is because from the bottom of your hearts; you exposed yourselves by identifying with me through opposition to success and after the success. You can only get satisfaction through the voluntary and understandable way of believing in issues you do. You are only expecting your return from God and you are looking for the future of the country-your children and grand children.” he said.
- May 23, 2018