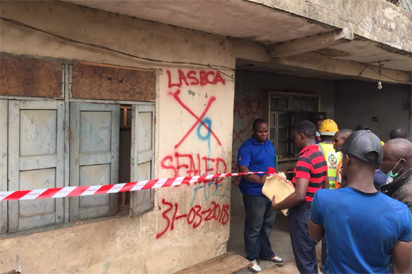 Two people, a young girl and a from man have been confirmed dead in a building that collapsed in Agege area of Lagos in the early hours of Saturday.

Apart from those dead, a man also got injured in the collapse of the building. The building, which is number 9, Abeje Street, Markaz Agege, partly collapsed at the back side.

While confirming the casualties, the General Manager of Lagos State Emergency Agency, Mr Tiamiyu ordered the immediate evacuation of other residents of the house and sealed it.

He further urged Lagosians not to ignore cracks signs on the building to avoid the incident such as this.

It was gathered that though there have been heavy cracks in the wall of the building for some time, residents ignored the sign before the unfortunate incident.
- April 02, 2018