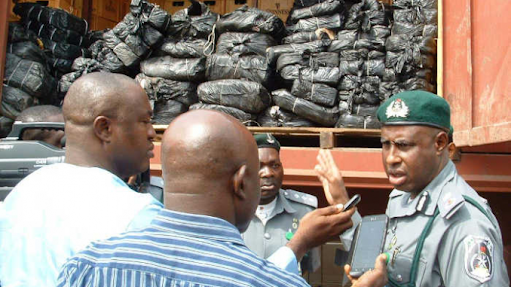 The Federal Operations Unit, Zone `A` of the Nigeria Customs Service (NCS) has intercepted 10 trailer loads of parboiled rice and other contraband with Duty Paid Value (DPV) of N1.62 billion.

“The command also intercepted contraband with DPV of N1.46 billion between March 19 and April 9.

“Others are: 431 jerry cans of vegetable oil, 163 bales of used clothing, 569 pieces of used tyres, 69 bags of sugar and four containers, among others,” the Customs chief said.

Uba said the 570 parcels and 98 sacks of cannabis sativa, weighing 1,550kg, were intercepted on the Olorunda axis of Ogun, following a tipoff.

“These Indian hemp was the highest seizure of such hard drugs in the history of the command.

“Such a drug will have negative effects on consumers, if it escapes to the public.

“In the spirit of inter-agency relationship, the seized Indian hemp will be handed over to the National Drugs Law Enforcement Agency (NDLEA) for further investigation,” Uba said.

According to him, the command evacuated 2,671 bags of 50kg parboiled rice from nine storage houses in Ilogbo, Abeokuta.

He added that the evacuation was done by the Lagos Roving Team complemented by other teams of the service.

The controller said there were mob attacks on customs operatives but the officers were not deterred from performing their statutory responsibilities.

He said the goods were intercepted as a result of false declaration, adding that they were declared as baking powder.

“A total of 10 suspects were arrested in connection with these seizures,” Garba said.

He commended the support of the Comptroller-General of Customs, Col. Hameed Ali (rtd) and his management team for providing adequate logistics for the command to succeed.

Uba also hailed the Army and the Police for their support.

He pledged that the command would not relent in its efforts to bring down smugglers and improve government revenue.

He promised that NDLEA would carry out further investigation on it.

Opeloyeru acknowledged the contributions of NCS in the fight against illicit drug peddling.

He said the NDLEA could not win the fight without the support of other agencies and members of the public.
- April 12, 2018