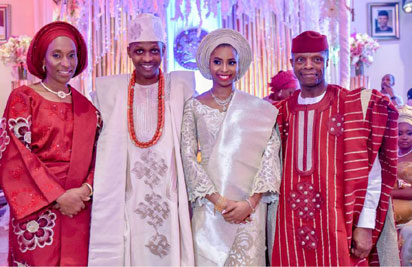 The Presidential Villa, Abuja was filled to capacity, as it hosted guests of the Vice President, Yemi Osinbajo.
The colorful event, was held in Abuja.
The high class traditional wedding witnessed who is who from the political class, the academia, the business class as well as associates of the Vice President. But Vanguard reliably gathered that guests were not allowed to enter the venue with their cell phones, while journalists covering the State House were not allowed to come near the venue. The event which literally brought activities at the Vice President’s wing of the Presidential Villa to a standstill began with a traditional marriage at his Aguda official residence at the presidential villa.


The Vice President’s daughter is being married to Oluseun Bakare.

A source at the Villa hinted that the organizers of the event did not want journalists to cover it to avoid any backlash especially this period the nation is mourning death of the abducted Dapchi girls and the herdsmen attacks in many parts of the country that led to the death of many.

Security aides of the Vice President on Wednesday had sent a message to reporters in the villa informing them that they were not needed at any of the programme for the marriage ceremony. According to the message from the security aides, the Vice President and his family had already contracted the entire publicity of the traditional wedding and the white wedding which will take place on Saturday to a private company.

Shortly after the traditional marriage, Guests including some state governors were hosted to a reception at the old Banquet Hall now called the State House Conference center. The white wedding has been scheduled to take place at the National Christian Center, Abuja, on Saturday and another reception for guests will be held at the State House Conference Center.
- March 16, 2018