Face Of One-Legged Man Caught Inside Ceiling In Lagos 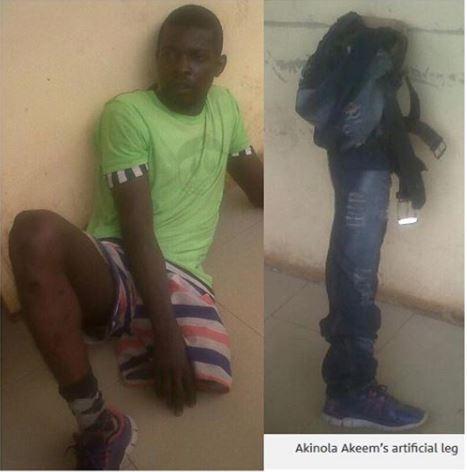 In a country of over 180 million people without any sensible social security from the government for the poor and vulnerable, things like this are not unlikely.


Sitting on the floor above is Akinola Akeem, a suspect thief who was nabbed in Lagos recently. The man who happens to be disabled, was arrested following his foiled attempt to burgle some shops at a shopping plaza in Shasha area of Lagos.


He was yesterday taken before Ejigbo Magistrate’s Court.

The father of four, as gathered, stormed Hub and Hub shopping plaza at about midnight, removed his artificial leg with which he climbed the ceiling of the storey building to gain entrance into two shops, before a guard caught him.
- March 27, 2018