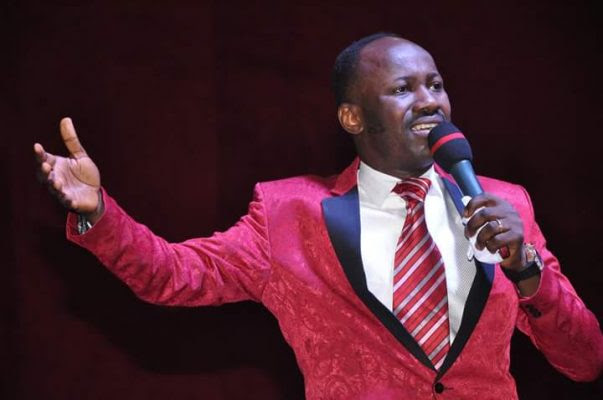 Apostle Johnson Suleiman and Pastor Joshua Iginla have been nominated for the maiden edition of the Nollywood Ambassadors Awards (NAA) slated to hold in Abuja on Sept. 29.

President of the Nollywood Ambassadors International Initiative, Mr Sunny-Ken Awoji, disclosed this in an interview with the News Agency of Nigeria (NAN) on Monday in Abuja.

According to him, the General Overseer of Omega Fire Ministries, Apostle Suleiman, will be honoured as ‘Nollywood Most Friendly Clergyman’ for his `passionate’ care and support for the movie industry, particularly for actors.

While the founder of the Champions Royal Assembly, based in the Federal Capital Territory, Pastor Iginla will be awarded as the ’Most Supportive Clergyman of the Year.’

“In spite of their huge spiritual responsibilities, these men have committed their resources to the wellbeing of Nollywood over the years.

“They are among our unsung heroes and worthy ambassadors that should be honoured, in a way of saying thank you to them.

“They have severally paid the medical bills of some of our own when they were having health challenges, and in some cases sponsored others for medical trips abroad. “Pastor Iginla has made it a tradition to motivate our actors whenever he is celebrating his birthday by giving them cars and other material items of value to the industry.


“Having shown uncommon patriotism to Nollywood, they need to be celebrated for them to be inspired and do more for humanity,” Awoji said.

He added that there were individuals and organisations, within and outside the Nigerian motion picture industry, that have contributed toward its astronomical growth that were also listed on the honour roll.

He noted also that anyone, across every sector, who has shown uncommon patriotism and contributed to the growth of the film making industry in Nigeria, was a worthy ambassador of Nollywood.

“Nollywood has evolved to become a global brand, and it is time to celebrate our brand ambassadors for their immense contributions to the growth of a brand that has created jobsfor many Nigerians.”

Awoji explained that since the award was geared towards recognising both practitioners and supporters of the industry alike, the award has been classified into internal and external awards respectively.

He identified others listed for the award to include a clergy, Jide Ogunsakin, Admiral Festus Porbeni and Dr. Chief Andy Bassey to be honoured as “Youngest Entrepreneur of the Year, among others.

He added that Nollywood has also listed some of its best to be honoured as Best Guild President of the year, Most Creative Director of the year, Best Producer and the Best Director.

The Best Actors, Male and Female, ‘Kannywood Best Actor, and the Most Promising Actor, male and female respectively, would also be honoured among others.

He said that the choice of the Federal Capital Territory (FCT) as venue for the awards was to represent unity and oneness of Nollywood.
- September 25, 2017