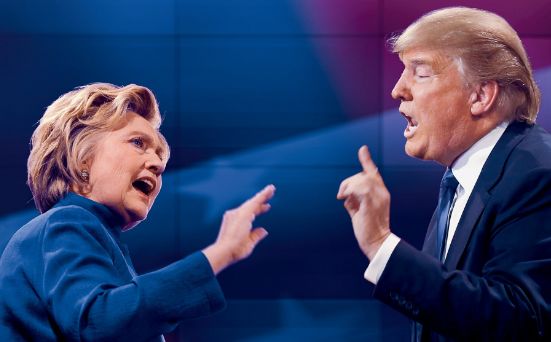 The people of the United States of America goes to the polls today to vote in the 45th President of the country. To many watchers within and outside the country, fondly described by its citizens as ‘God’s-own-country’, the people will not only be performing their civic responsibility; they will be putting the country’s over 200-year-old democracy to test once again.

The last time American voters faced such an onerous task was 2008, when the then Senator Barack Obama, a Democratic Party candidate, broke the jinx by emerging the first black to be sworn-in as President after a keenly contested election.

This time, the race for the White House is clear,

neck-to-neck between former Secretary of State, Hillary Clinton, who is the standard bearer of the Democrats and the Republican candidate, Donald Trump.

While one is on the verge of making history as the first woman to be sworn in as President of the US, the other is a highly successful entrepreneur and vintage ‘money bag.’

Both of them are strong contenders, no doubt and over the past months, they have been involved in vigorous campaigns targeted at the soul of the average voter across the US.

But the election campaigns have been described as the most dramatic, the most absorbing and the ‘grubbiest’ ever witnessed in the history of the United States.

The race for the White House has also been dogged by controversy and scandals, early warning signals to voters that they will need to do additional reality checks on the candidates before leaving their homes to vote on Election Day.

At different stages, both candidates have been entangled in controversy. The latest is about Clinton’s use of a private e-mail server over a general one during her tenure as secretary of state.

Although Trump has wormed his way to reckoning through a very aggressive campaign that has also literally left nothing to chance, he has been accused of sexually abusive behaviour and for making certain unacceptable comments.

Still, both candidates have not neglected to deal with the most pressing issues affecting the electorate in their campaigns. There have been debates, as always, around key subjects, such as the American economy, taxation, national security, foreign policy, criminal justice, healthcare, childcare plan, education, social security, immigration and refugees, infrastructure, urban renewal and more.

Some of these subjects have been frequently raised in the campaigns because of the importance attached to them and their relevance to law and order.


For instance, Trump’s call for a review of the criteria for selecting immigrants based on their likelihood for success and their merit, skill and proficiency, as well as his insistence on an immigration policy that will put the interest of the American citizen first above that of the immigrant, provoked a wide range of reactions across the states. Just as much as Clinton’s plan to expand social security and her comments in this regard have raised hope in a possible and significant reversal of the social security policy among the people.

Although the events of the past months indicate that none of the candidates has a clear edge over the other, in terms of popularity, the voters will decide in the end who to run the affairs of the nation for the next four years.

However, there is an indication that a significant proportion of the American population will not be allowed to participate in the election. Investigation shows that state laws has stripped about six million Americans convicted of various offences of their voting rights.
- November 08, 2016