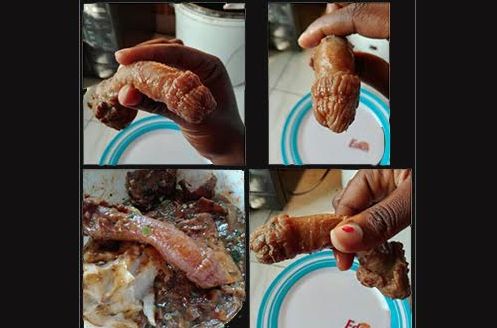 A lady identified as Akosua has narrated how she was served a 'banana'-like meat at a restaurant she bought food at Pokuase in Accra, Ghana.

The lady said she went to buy food at the eatery only for her to discover a male-looking genital in her food after almost finishing the meal. She said:

"I had gone to get some food from the food joint because I was hungry and my preferred choice was Tuo Zaafi which I bought and took home to eat, I had eaten all the other meat in the soup and was about finishing off with the biggest piece when I noticed the funny looking meat which looked like a male genital organ." She also stated that she alerted her family about the strange meal she ate and they all laughed about it saying they will feed it to the dog before her sister insisted that an investigation should be put in place either by reporting it to the police or the laboratory...
"My sister opted to show it to a lab technician friend later, who said because the meat was cooked, an ordinary lab test wouldn’t be able to prove it to be animal or human. He advised a forensic test be done on it but considering the bureaucratic processes these things go through, we gave up and the meat lies in our fridge."
- November 16, 2016