SHOCKER: This Man Stole A Native Doctor's Wallet & Got The Shock of His Life 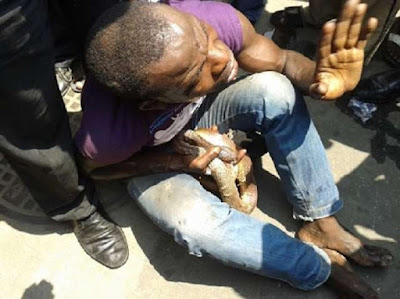 A thief who stole a wallet from a native doctor was shocked when the item turned into a dangerous snake in his hands. The guy tried all he could to extricate the reptile from his hand but to no avail, so he had no choice but to go to the owner of the wallet and confessed what he did.

According to Adom Online, the incident left people baffled after they watched as a wallet turned into a deadly cobra in the hands of the thief as a result of "black magic".

It was gathered that the 27-year-old thief identified as Mdu, had snatched the wallet from the owner, not knowing that he was playing with fire as the owner is a known witch doctor. When he tried to open it to see what he got, the wallet turned into a cobra that wrapped itself around his hand.

A witness revealed that the terrified thief tracked the native doctor who was about to board a taxi and confessed that he stole his wallet and wanted to return it.

“He stole a wallet from an old man; people around are just saying the old man is a Sangoma (native doctor), but no one knows the man around. When he snatched the wallet he went behind a billboard; that’s when the wallet turned into a snake.

"The snake is not biting him but it's stuck in his hands as he failed to throw it way; this is first-grade black magic."