People are hell-bent on pulling me down-Jonathan 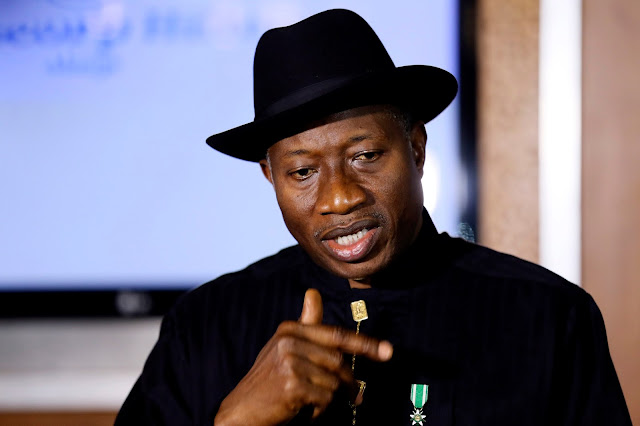 Former President Goodluck Jonathan has reacted to allegations an investigation is on over allegations linking him to the  Niger Delta Avengers.Jonathan in a statement released by his media aide, Ikechukwu Eze, said the reports that the Federal Government was probing him was untrue saying some misguided people to pull him down at all costs by linking him with the militants

“Our attention has been drawn to two stories entitled “report links Jonathan to Niger Delta Avengers” and “FG probes Jonathan over N/Delta bombings’ published in some newspapers, of Thursday, August 18, 2016, with the claim that some intelligence reports had linked Jonathan to the renewed militancy in the Niger Delta.
“We obviously would have ignored the allegation, having responded recently to the exact same fabrication peddled by a shady militant group, but for the new dimension of bringing in the authorities, while hiding under the often-abused journalism latitude of quoting nebulous sources.
“Firstly, we note that there were similarities in the stories published same day by the newspapers that are too striking to pass the test of the normal newsroom process of diligent reporting and independent investigation.

“We are convinced that such clear coincidences are only permissible in situations where general statements are issued, but not on matters of intelligence/security reports which do not fly into newsrooms as press releases.
“We are also concerned that the stories did not differ in content and substance from the trite allegations earlier made by the so- called Reformed Niger Delta Avengers over the same lies of linking Jonathan to the militants.

“For instance, we are amazed that newspapers would be quick to report that the intelligence gathering was said to be a confirmation of a similar claim by the Movement for the Emancipation of Niger Delta, MEND”, even without subjecting such frivolity to any ethical interrogation.
“From what we know about intelligence gathering, there is no responsible government agency that would rush, as claimed in the stories, to adopt the accusations of a questionable rebellious organization as its own findings, without applying the professional processes of rigour and due diligence.

“It is sad that the publications wore the cloak of deceit from same misguided characters that are hell-bent on pulling down the former President, despite his clear record of diligent service to his country and long standing commitment to the good of society.
“There is no doubt that there exist such people who may have scores to settle with the former President but are now feeling frustrated by the fact that his national and international profile has continued to rise, despite their recourse to less- muck- raking character assassination.

“Such people will stop at nothing to continue to throw obstacles, albeit futilely, on his path. “We are aware that the same people approached other well-meaning newspapers with the same false information, but they were wise to turn it down on account of its absurdity.

“Our media houses should then be careful not to make the country a laughing stock by being hoodwinked into passing off the perverted voices of irritant groups as that of our well respected official security authorities. “Apart from toying with the serious issue of libel, those newspapers lending themselves to be so cheaply used by miscreants, are also doing gross disservice to our collective good and the image of the country.”
- August 19, 2016