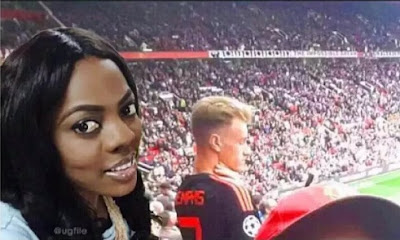 
The Tv personality had earlier sparked a Twitter storm when she tweeted pictures suggesting she was at Old Trafford to watch her favorite team, Manchester United after photo-shopping herself into them. The photos were later discovered not to be her own and that she was not at the stadium during the game. She was later criticized and mocked on social media for doing such a 'low thing'.


She later explained the photo-shopping was nothing but a prank, but many people didn’t believe that. Continue...
The management of TV3 however described her action as an “online photo theft” and suspended her shortly afterwards. A statement signed by the company’s Chief Executive Officer, Augustus Dickson on that Saturday October 3 said “After preliminary investigations internally, and in accordance with TV3’s own commitment to the highest level of professionalism, management has decided to take Nana Aba Anamoah off air until further notice.

Many of Nana’s followers criticized TV3 heavily describing the suspension that was made public as highhanded and unfair. There had been a huge campaign on social media with many influential personalities calling for her reinstatement considering her enormous contribution to the network almost in a decade, but they turned deaf ears to them.


The amiable lady has now resigned from the tv station. It is not clear what her next move will be. A lot of her fans have described her resignation as what TV3 will regret
- November 02, 2015