Girl Reveals how Her Father is Sleeping with Her using Charms 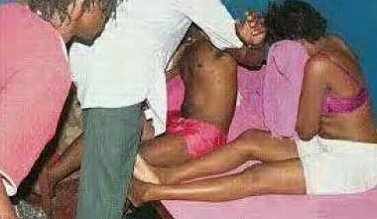 Whenever I see mothers and fathers destroying their daughter's life either through spiritual abuse of sexual abuse, it makes me feel sad and even want to help such ladies out of their mess. This is really sad.

A 44-year-old man from Ini LGA of Akwa Ibom state who has been allegedly defiling his own daughter has claimed that he sees nothing wrong with having s*x with his biological daughter.

According to the man, Emmanuel Udoh, who lives at 2 Ajasa Command Road, Meiran, Lagos state:

“I have had sexual intercourse with her severally. It is a normal thing and I don’t see anything bad in sleeping with my daughter because I know she will not get pregnant because I don’t ejaculate inside her”.


It was gathered that Mr. Udoh's ex-wife took custody of their two children after they separated seven years ago when the victim was ten years old. The victim who lived with her mother reunited with her father when her mother brought her back after she completed her secondary education in the month of September to enable her further her education.

The abuse however started in the evening, on September 13, when Mr. Udoh asked his daughter to go and have her bath. The daughter who initially refused went to take her bath after her father insisted.

"It was my father that helped me out of the bathroom and took me inside. When I got inside he gave me Garri to drink and before I knew what was happening. He removed my wrapper and had s*x with me. I don’t know if he drugged the water as I became very weak."

- the worst thing that can happen to a young girl is to be living with a terrible parent, you are in trouble!
- November 05, 2015