Saraki Is Our Man, We Will Not Abandon Him – PDP Opens Up 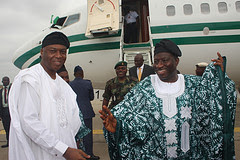 If a man dumped your party, joined another to defeat you in the general election and you now turn around to be fighting for the same man, there is an agenda you are working to achieve. That's politics for you.

The Peoples Democratic Party, PDP, has insisted that Senate President Bukola Saraki is their man and is fit for the office he is occupying; hence they are not considering any candidate to replace him.

PDP spokesman Olisa Metuh gave their position: “Does the trial have merit? When we see the merit of the case, we will take position. But for now, there is nothing like that.”
The PDP denied reports that it was already looking for a senator from the opposition party to replace Saraki, who is currently under pressure to resign from office following his trial for false asset declaration by the Code of Conduct Tribunal.

Speaking with Punch, Metuh said the party still believed that the trial of Saraki was political and that the PDP would not think of abandoning the Senate president until it sees the merit of the case.

He added, “We have no candidate for the office of the Senate President, because we have a fit person occupying the position for now.

“We are behind him and we can’t abandon him just because he is undergoing trial. Anybody can be put on trial, but the question we should ask is whether the trial is political or not."

Saraki, a former governor of Kwara State, is currently facing a 13-count charge of making false declaration as a governor between 20013 and 2011.

Since his arraignment before the tribunal, there had been speculations that the PDP, which produced Saraki’s deputy, Ike Ekweremadu, had been scheming to replace him with one of its senators.

Among those being touted as possible replacements for Saraki are Ekweremadu; a former Senate President, David Mark; and a former Governor of Akwa Ibom State, Godswill Akpabio.