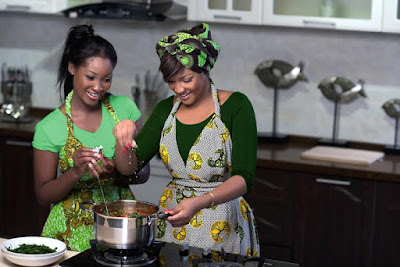 Ace Nollywood actress Omotola J Ekeinde is not big on granting interviews, according to her this is because she often gets misquoted and it spirals out of control. However, she sat down with Olisa Adibua for “The Truth” and nothing but the truth and gave some serious scoop into her life.

Here are the major excerpts from her interview with Olisa:


Though married for almost twenty years to husband Captain Matthew Ekeinde, Omotola has never cheated on her husband or been cheated on. She admitted that sometimes because she is human, she might notice that a guy is attractive but it stays that way.
Omotola met her husband in church, through his sister. His sister invited her to take a drive with her in her convertible car and unknown to Omotola, her husband Matthew was seated in the car. He showed up at her house the next day and they hit it off.
When asked to name her close pals in the movie industry, Omotola named hunky actor Chidi Mokeme as her best friend.
As an actress of her calibre, there has been chances for her to relocate but she turned it down twice. Why? She does not want to break up her family. According to her, it’s a sacrifice she has had to make because her husband does not want to live abroad and chances he will get a good job are not as high because there are already several pilots in America.
When asked about an estimate of her income for 2014, the actress who revealed that she is also into real estate was especially coy with her response. Olisa's blog reports that they suspect it MAY be somewhere around 250 million. But Omotola did shock them when she revealed that her daughter Meraiah, who is a Knorr ambassador was paid 2.4 million Naira for her role in Unilever’s Knorr cube advert.