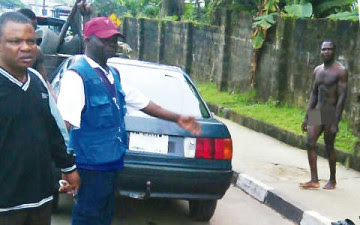 
The driver, identified as Ekpe Okpo Ekpeyong, would be made to undergo a psychiatric test before being prosecuted. The state sector commander of FRSC, Mr. Ikechukwu Igwe said..
“His name is Ekpe Okpo Ekpeyong and he gave his address as 8, Fuller Street in Calabar-South. Recall I gave the orders that the driver should be arrested and when he was stopped along the same Marian Road today (Wednesday), he was gentle and this time had his seat belt on.

“My men demanded for his driving licence and he gave them but when he saw that he was about to be arrested, he took off his clothes and started behaving funny, but this time, he was overpowered by the officials on duty. His vehicle is in our office and he is undergoing investigation under our custody.”“His driving licence and vehicle particulars are not genuine. We will take him to the psychiatric hospital here in Calabar to find out if he is a normal person because no person in his right senses will strip just anyhow,
- September 04, 2015