Wife Poisons Her Husband To Be With A Boyfriend In Lagos 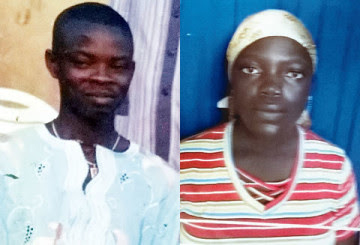 A housewife, Kwenume Ojo (aka Abiodun), has been arrested by men of the Lagos State Police Command for allegedly killing her husband, 32 years old Jimoh Ojo, in the Yaba area of the state.

It was learnt that Kwenume put poison in her husband’s soft drink and forced it down his throat while he was asleep in his home.

The young wife suspect took the poison from a relative of her boyfriend after she was forced to marry Jimoh. The incident happened on Friday on Apolo Street, in the Makoko area of Lagos.

Jimoh’s in-law, Rotimi Akinlagun, explained that the deceased was retarded, which made it difficult for him to get a wife. He said his marriage to Kwenume was arranged by the two families.


He said, “Jimoh was a carpenter. When he was born, he fell sick and that affected his health as he became retarded. When he became mature, we decided to get him a wife. We started asking around for anybody who could give him a wife.


“Kwenume’s father heard and he contacted Jimoh’s family. He gave them Kwenume to become Jimoh’s wife. She had no choice in the matter.”

We learnt that Kwenume’s father took the decision to prevent her from marrying her boyfriend, who he did not like. The dislike, it was gathered, stemmed from the maltreatment of Kwenume’s sister, who was married into the boyfriend’s family.

“She was brought to me and we took her to Jimoh’s hometown in Yewa, Ogun State. He was going there to make love with her. After six months, she became pregnant and we brought her back to Lagos State.

“The couple moved into a new apartment to start a new family. Their apartment was close to my house so I could monitor them. Abiodun (Kwenume) was assisting my wife to sell food at her canteen,” Rotimi added.

It was learnt that after giving birth to a baby girl, christened Hannah, the suspect became attracted to her former boyfriend and she started visiting him.

She was said to have met his elder brother, Wensu, an herbalist, who allegedly gave her the poison to put in her hubby’s drink so she could marry the unidentified boyfriend.

Jimoh’s elder sister, Modupe Akinlagun, said the victim had returned from work on the fateful Friday and visited her shop to get food.

She said, “He dished the food himself and ate. After eating, I asked him to go home and rest. When his wife returned from an errand I sent her, I asked her to also return home with her baby.

“I was still there when his wife came to call me that he had slumped in the toilet. When we got there, people had surrounded him and were pouring palm oil into his mouth. He was vomiting the oil and a white substance. He kept saying, ‘Iya Hannah has killed me, she opened my mouth and poured drug inside.’

“Iya Hannah (Kwenume) denied Jimoh’s accusation, but he insisted she forced the poison down his throat.”
Another relative explained that Kwenume put the poison in a bottle of drink that the victim had brought home to share with her.

He said, “They usually shared their food and drinks together. After he finished eating at the canteen that day, he bought a bottle of drink and drank half. He took the remaining home to share with his wife.

“It was when she returned that she put the poison in the drink. She then forced it down his throat.”
Modupe’s husband said Jimoh died around 11.30pm on Friday.

He said the community elders took Kwenume aside to press her for information on where she got the poison. He said after some time, she confessed to the crime, adding that she collected the poison from her boyfriend’s brother who lived in the Sogunro, in Iwaya area.

He said, “Around 3am on Saturday, a policeman, together with some of our people went to get the man.” The two suspects were said to have been kept till dawn until a team of policemen from the Adekunle division arrived in six vans.

Some youths attempted to lynch both suspects, but for the intervention of the policemen.

The traditional ruler of the Egun community, Seriki Dito, appealed to NGOs to care of the couple’s child.
- June 30, 2015