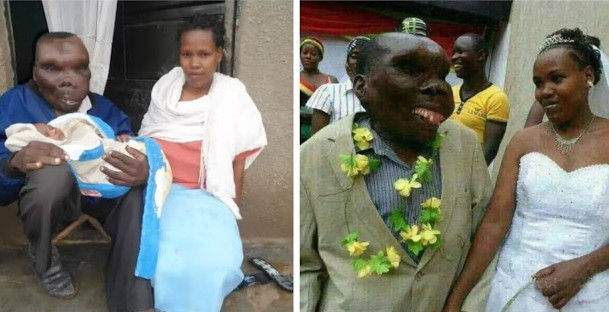 A 47-year-old father of seven, who has been dubbed the ugliest man in Uganda, has become a father for the eighth time in the Kyazanga Lwengo district of the African country.

Godfrey Baguma has become a proud father of eight children after his beautiful wife Kate Namanda, 30, delivered a healthy baby girl. The couple now have six children together, while two others are kids from Baguma’s first unsuccessful marriage.

His wife, Kate said: “Once you find a man you think is right for you, do not listen to what other people say. Follow your heart. Money and physical appearance should not be an issue.”

The man, who suffers from an extremely rare, unknown disease, won his title of the ugliest man in the country after he took part in the contest to make money for his family.

Speaking about his new life, he said: “In 2002, I was mending shoes, when some people approached me and said they had an event at which they wanted me to be a chief guest.

"They took my pictures and a few days later, I saw my picture in the newspapers where I had declared myself the ugliest man alive. I was shocked and angry at the same time because I had not said so. They also told me that as a cobbler, I could not make enough money to sustain my family.
"They asked me to participate in a contest, saying I would make more money since I would be a tourist attraction. I agreed, and indeed I won. That is how I got the nickname, Ssebabi, which means the ugliest of them all. Today, I feel good, about it because it is an honour.”Godfrey and Kate live in a small house, bringing up all eight children and trying to make ends meet
- June 23, 2015