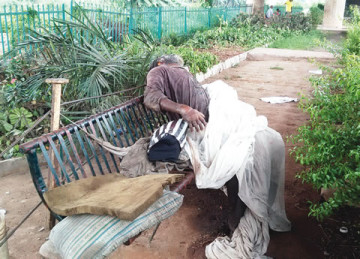 The residents of Ibukun Oluwa Community in the Oworonshoki area say they are scared that a decaying corpse in the Lagos State owned parks and gardens in the area may cause an epidemic.

Speaking with PUNCH Metro, the residents said the corpse had been abandoned at the gardens since Saturday, adding that efforts to get health workers to remove it had been abortive.

They said they feared that the body could blow up if nothing was done on time.

When Punch's correspondent visited the area, he observed that the stench from the corpse had filled the whole community.

The decomposing body was balanced on one of the steel benches constructed at the gardens, located near the entrance into Ogunnaike Street.

The correspondent reported that passersby quickly covered their nostrils and raced into the community immediately the odour hit them.

A community leader, Elijah Akinpelu, told our correspondent that he got a piece of cloth to cover up the body.

He said the victim, who people call Peter, had been living under the bridge for the past four years and no one knew his family members.

He said, “He has been around this community for the past four years. He did not seem to have any mental problem.

“The police once came to chase out some homeless people, but they left him. He died on Saturday evening. He fell to the ground, but somebody carried him to the seat. He has been in that position since Saturday.”

PUNCH Metro learnt that the police, officials of the Kick Against Indiscipline from the Ministry of the Environment, had visited the gardens.

A cleaner at the gardens lamented that the police and the KAI officials merely looked at the corpse and went away.

He said, “I was not around on the Saturday the man died. But when I resumed, I called the attention of my boss to it and he immediately called those at the state secretariat. They promised to come and evacuate the corpse, but they didn’t show up.

“Some KAI officers have visited this place and after looking at the corpse, they left. The police around the Iyana Oworo Berger area also did nothing.”

The General Secretary of the Ibukunoluwa Community Development Association, Kabiawu Babajide, expressed disappointment at the slow pace of emergency response of the officials of the state government.

He said in most instances, the officials responded to emergencies when it was too late.

He said, “Since Saturday we have been calling the emergency numbers to alert them to the development. They promised that the appropriate department would be contacted to evacuate the corpse. That has not been done.

“The corpse is now swollen and smelly. It is not hygienic to leave the corpse in a place where school children play and a place that is close to a residential area. It can cause a disease which can affect the health of the people.”

Another resident, Banjo Adekunle, asked the state government to investigate the delay in emergency response and punish those found guilty.

“The corpse has been there for the past four days and nothing has been done. The police are supposed to barricade the area so that children will not go there,” he said.

A top government official in the Lagos State Ministry of the Environment said the matter was out of the purview of the ministry.

Another official of the Lagos State Emergency Management Agency was contacted, he promised to act on the information.

He said, “I am just getting to know about it.

“Thank you. I will work on it immediately. We will move there now.”

The Police Public Relations Officer, Kenneth Nwosu, when contacted, said the police were collaborating with other agencies to remove the corpse.

He said, “We are working with relevant agencies of government towards speedy evacuation of the corpse and cleaning of the area to avoid outbreak of any epidemic.”