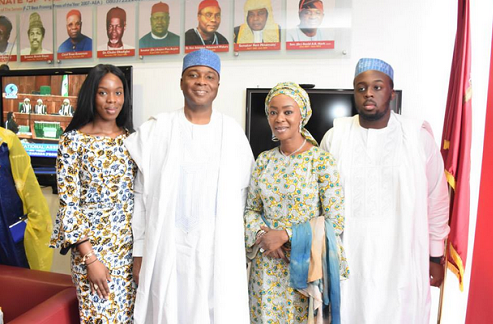 The new Senate President was joined by his family after his inauguration. It was a sweet victory for them.

Saraki promises laws to reform oil sector, create jobs, improve security...
Senator Saraki has pledged the commitment of the Upper House to making laws that would boost the economy, following his unanimous election as the President of the 8th Senate.

Making the pledge while delivering his acceptance shortly after he was sworn in, Saraki said that the 8th senate would make laws that would create more job opportunities and reposition major sectors of the economy, particularly the oil sector.

While thanking his colleagues for electing him, he promised to be just, equitable and fair.

“I am most honoured and privileged to be elected to serve as President of the Senate. I accept with humility and respect the honour you have conferred upon me today.

“I want to thank all members of the National Assembly for the maturity and patriotism in the exercise we have just concluded in electing the leadership of the 8th Senate.

“As the President of the 8th Senate, I shall be guided by the enormity of the responsibilities that this moment imposes on all of us.

“This new senate must make laws that will make doing business in Nigeria more competitive.”

Saraki thanked President Buhari for remaining steadfast in his defence of the right of the National Assembly to choose its own leaders, saying his position had laid a solid foundation.
- June 10, 2015