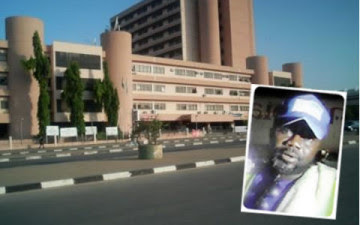 This is what happens when a person believes the only way to thrive is to engage in fraud of any kind:

A senior official of Federal Ministry of Health, Martins Ugwu, who has been practising as a ‘medical doctor’ for over nine years, has been arrested upon discovery that he stole the licence from his friend.

Ugwu, who is a Senior Medical Officer II on Grade Level 13, was found to have impersonated his friend, Dr. George Daniel, who is undergoing a residency training programme in Jos, Plateau State.

He allegedly stole the licence from his friend for whom he was best man during his wedding in 2006.

They both hail from Orukpa in the Ogbadibo Local Government Area of Benue State.

According to Punch, Ugwu, who was due to be promoted to an Assistant Director in the Nigerian Centre for Disease Control, a parastatal of the Federal Ministry of Health, has been working in the civil service since 2006 under the name, Dr. George Davidson Daniel, until he was indicted by the Medical and Dental Council of Nigeria as an impostor.

Fake Doctor Ugwu who was arrested by the police last Thursday, was, however, released a few hours later, fueling speculations that the policemen might have been compromised.

Ugwu’s arrest was sequel to an investigation by the MDCN, which registers all Nigerian doctors and regulates their practice after investigations, the MDCN uncovered two Dr. Daniels - the same name on two separate identity photographs.

The MDCN in a letter to the Chairman, Federal Civil Service Commission, dated June 4, 2015, signed by the Registrar, Dr. A. Ibrahim, described Ugwu as an impostor, adding that the case had been reported to the police for further investigation and action.

It reads, “Records available to the council revealed that this “Dr.” Davidson Daniel George is an impostor as he is impersonating another Dr. Davidson Daniel who is the genuine doctor and he currently undertakes his residency training in Jos, Plateau State.

“The council summoned and interacted with the genuine doctor who gave some vital information on the impostor. The council has reported the matter to the law enforcement agency as a case of impersonation; with the genuine doctor deposing to a statement with regard to what happened between him and the fake doctor whose real name is Mr. Martins Ugwu.

“As it is, Mr. Martins Ugwu is an impostor. You may therefore wish to take further actions to deal with this matter in accordance with the provisions of the law.”

The MDCN said it was dissatisfied with the manner the police handled Ugwu’s case and promised to take up the matter with the Inspector-General of Police.

“The matter is under investigation, though the suspect has been released on bail for now,” he stated.
- June 08, 2015