Do You Know Why Patience Jonathan’s Security Head Was Killed In Abuja? 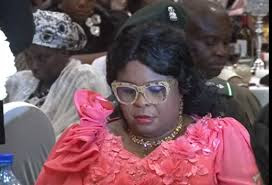 Security sources who spoke to LEADERSHIP on the unfortunate incident which occurred along the Airport Road said the killing was not unconnected with his role as the former first lady’s aide.

DSP Igbomie, a former principal security officer to the former first lady, was shot death and his body found in his Honda Accord car last Friday with his vital documents, including phones, wallet and other personal effects, ruling out armed robbery as motive for the killing.

The security source told LEADERSHIP that the former aide was a very close alley to the former first lady and must have stepped on several toes in the discharge of his duties.

According to him, DSP Igbomie, an indigene of Okrika in Rivers State, was a very influential player during the days of the political campaigning for the last election and must have incurred the wrath of many people who crossed the part of the first lady.

“The killing cannot be unconnected with his previous appointment as the PSO to our former president wife. They have started killing people who knew about their dirty deals. It shows that more people close to the former president should watch their backs. Those people act like mafia and they will go to any length to have their way, he said.

Another source averred that Igbomie may have been engaged in some deals while acting as security aide and the people may have come for a payback. He called on the police to investigate all angles to the incident and ensure that the culprits are brought to book.

“Jacob might know something that could implicate some persons at the probe panel that is about to be constituted. He might have picked up some implicating evidence against some powerful people when he was very close to power. He could have done some deals with them which they feel might implicate them.

The source averred that the killers could have come from Rivers State where he said, the former first lady played a major role with the crisis that erupted in the state during the last general election.

“All the killings that went on in Rivers State by evil men in their desperation for powers may not go unpunished. All those responsible for the killing of innocent people during the election all because of politics will definitely be punished,” the source said
- June 30, 2015