ALERT! Faces of Men and Woman Caught for N8bn Fraud in CBN 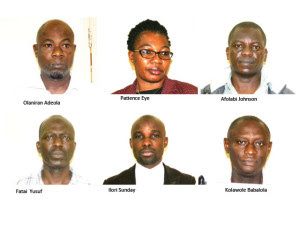 Six officials of the Central Bank of Nigeria (CBN) and 16 bankers who allegedly engaged in sharp practices over mutilated currency notes are now in big trouble and will have their days in court.

The EFCC has concluded plans to arraign six top executives of the CBN and 16 other bankers working with commercial banks, following their implication in the mega scam involving the theft and re-circulation of defaced and mutilated currencies.

While carrying out the assignment, the investigation team was alleged to have found one of the currency boxes filled only with old newspapers rather than 20 bundles of N1000 notes.

The indicted CBN officials are:

The lid on the scam, widely suspected to have gone on unchecked for years, was blown on November 3, 2014 via a petition to the EFCC alleging that over N6.58billion was cornered and discreetly recycled by top executives of the CBN at the Ibadan branch.

This sparked off the investigation by the EFCC.

The suspects will be arraigned on a five-count charge by the EFCC before a Federal High Court in Ibadan, Oyo State, between Tuesday and Thursday.

“The suspects, who were members of the Briquetting Panel, plotted their way to infamy on September 8, 2014, while carrying out a Briquetting exercise at the CBN Branch, Ibadan. In banking parlance, Briquetting is disintegration and destruction of counted and audited dirty notes. By this practice, depositor banks usually take mutilated notes to the CBN in exchange for fresh notes equivalent of the amount deposited.

“Instead of carrying out the statutory instruction to destroy the currency, they (the suspects) substituted it with newspapers neatly cut to Naira sizes and proceeded to recycle the defaced and mutilated currency,” said EFCC spokesperson, Mr Wilson Uwujaren.
- June 01, 2015