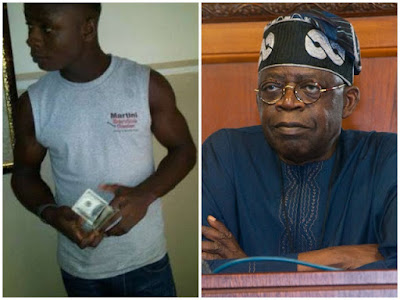 A 19-year-old student accused of defrauding several people using a fake Facebook account in the name of Sen. Bola Ahmed Tinubu has pleaded not guilty in court.
Emmanuel Eto, a 19-year-old National Diploma (ND) II student of the Delta State Polytechnic, Oghara, was arraigned on Monday on a three count-charge of impersonation, conspiracy and cyber fraud at an Ikeja Magistrate's’ Court.
The Prosecutor, Insp.Edet Okoi, told the court that the accused had between April and May created a Facebook account in the name of Tinubu, a former Lagos governor of Lagos State and national leader of the All Progressives Congress (APC).

He allegedly used the account to defraud unsuspecting individual who he lured to apply for job opportunities through the Facebook page," Okoi said.
“He fraudulently obtained the sum of N26, 850 as processing fees from each of the individuals that subscribed. “Eto lured the public to believe that he had the powers to get employment for all who subscribed.

Eto pleaded not-guilty to all the charges.
Magistrate Dan-Oni granted the accused bail in the sum of N100,000 with two sureties in like sum and adjourned the case till the 7th of July.
It will be recalled that the student had in May written a confessional statement in which he claimed he was pushed into the crime by financial constraints caused by his mother's illness.
"I did what I did because my father is late and my mother has been sick for a long while," he had said