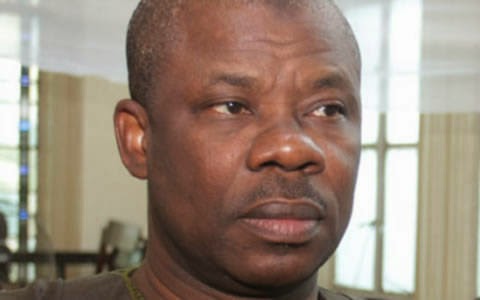 Gov Amosun
TheNation had yesterday reported that one Wasiu Ogunnoiki, 31, was arraigned 2 days ago, September 2, in Magistrate's Court 1 in Sagamu, allegedly for "engaging in acts capable of denting the image" of Ogun State Governor Ibikunle Amosun on his personal Facebook account. Wasiu, who is said to be a motorcycle driver, had reportedly pleaded not guilty, was granted bail at N400,000, but remained in custody. His case was adjourned until December 5th.

Here's a statement from the Ogun State Government:

The attention of Ogun State Government has been drawn to a report in the newspapers stating that an Okada rider in Sagamu has been charged to court and consequently remanded in prison custody for denting Governor Ibikunle Amosun’s image on Facebook.
I state categorically that the State Governor, Senator Ibikunle Amosun knows absolutely nothing about the allegations leveled against the Okada rider and the court case. The
governor knew about the case only after reading the report in the newspapers.
The governor consequently dissociate himself entirely from the any such action taken against the said Okada rider or indeed against any other person in that regard. Senator Amosun, being a true democrat believes that all citizens are entitled to freedom of expression as enshrined in the Constitution of Nigeria.
As the Chief Law Officer of the state, upon becoming aware of the report, I have examined the provisions of the law under which the Okada rider was allegedly charged to court and cannot find a single correlation between the offence for which he was charged and what he is alleged to have done.
Nevertheless, the Governor has immediately directed the Ministry of Justice to urgently look into the matter to prevent the infringement of the Okada rider’s fundamental rights and bring an end to his continued remand in custody. While the present administration in Ogun State does not want to encourage indiscipline and abuse of rights, it will also not tolerate the infringement of rights of any citizen. Abimbola Akeredolu
Attorney-General and Commissioner for Justice