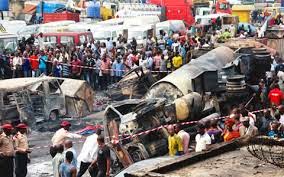 
The fire incident, which started around 5:00am in the morning raged till 10:am before men of Oando and Totalfire fighters as well as the Fire Service arrived the scene to put it out.

According to an eyewitness, the fire started around 5:00am in the morning when people suspected to be oil-bunkers were busy transferring PMS from kegs to the tanker.


The eyewitness also added that residents of the area had made several complaints in the past to the police on illegal activities of the bunkerers, but nothing was done until the explosion occurred.


An official of Total depot who refused to reveal his identity however, told Vanguard that:


“Well we have tried our best to put off the fire so it will not affect other property and total dockyard which of course would have caused a greater damage.


The fire razed several shops, as well as a part of a Church building around the area. However, there was no report of loss of life in the incident that started very early in the morning.