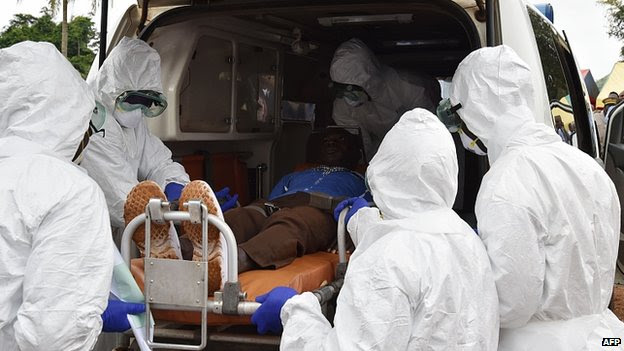 The outbreak of Ebola in West Africa will take at least six months to bring under control, the medical charity Medecins Sans Frontieres (MSF) says.
Speaking in Geneva, MSF President Joanne Lui called for strengthened international co-ordination led by the World Health Organization (WHO).
Earlier, WHO said the scale of the outbreak appeared to be "vastly underestimated".
It said that "extraordinary measures" were needed.
The epidemic began in Guinea in February and has since spread to Liberia, Sierra Leone and Nigeria.
So far, 1,069 people have died.
Ms Lui said that controlling the outbreak in Liberia - which has recorded more than 300 deaths - was vital to containing the epidemic.
"If we don't stabilise Liberia, we will never stabilise the region," she said.

Health systems in West Africa are being severely strained by the Ebola outbreak
"In terms of timeline, we're not talking in terms of weeks, we're talking in terms of months. We need a commitment for months, at least I would say six months, and I'm being, I would say, very optimistic."
Ms Lui also called for more action from the international community, led by WHO - the UN's health agency.
"All governments must act. It must be done now if we want to contain this epidemic," she said.
Ebola is transmitted by direct contact with the body fluids of a person who is infected.
Initial flu-like symptoms can lead to external haemorrhaging from areas such as eyes and gums, and internal bleeding which can lead to organ failure.
The WHO recently said that the risk of transmission of Ebola during air travel remained low, as the disease is not airborne.
As a consequence, Kenya Airways has rejected pressure to suspend its flights to the Ebola-hit states of West Africa.
- August 15, 2014