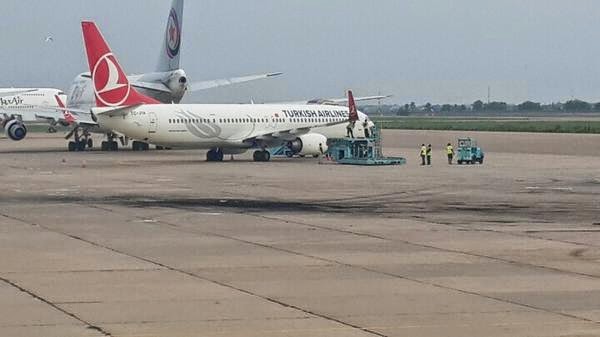 Fire service officials averted what could have been a tragedy at the Aminu Kano International Airport last night after a fuel tanker feeding a Turkish airlines aircraft caught fire.

The tanker was however burnt to ashes while the aircraft, an Airbus 340, which was to airlift passengers from Kano to Istanbul, was partly damaged. The flight was subsequently cancelled with the passengers, most of whom had arrived the airport, disappointed.

Garba Shehu, the Media Consultant to former Vice President Atiku Abubakar, who was travelling with his family, told PREMIUM TIMES the aircraft was saved from being completely burnt following a quick decision by officials to hurriedly tow it away from the burning truck.
Mr. Shehu said:

“The Airbus 340 aircraft which had the burning truck under its wings made a miraculous escape following a decision to tow it away from the fire just in time before the fuel-laden tanker burst into a towering flame. The flight taking my family and I, among many other
passengers to Istanbul from Kano was cancelled a short while ago following indications that the aircraft, even though not destroyed, was partly damaged on its wing.
Fire engines at the airport emptied their contents without any serious impact on the raging fire, which burnt without let until it had consumed the oil tanker.”PremiumTimes reports that officials of the airport and other aviation authorities could not be reached this morning. Officials of Turkish Airlines could also not be reached as at the time of this report.
- July 24, 2014