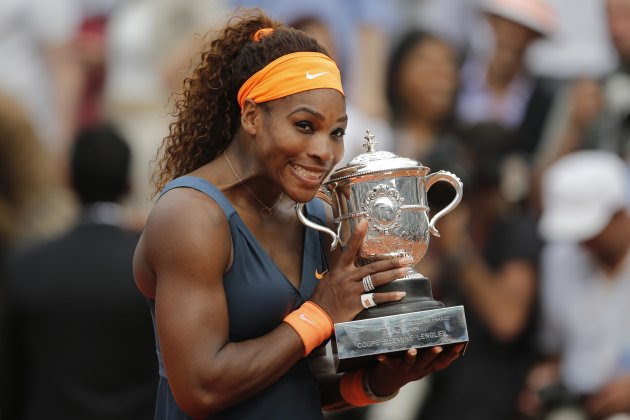 Yes!!!!! Yes !!!! Yes!!!!! my gurl Serena won! She won this time. Its been eleven years since Serena Williams won the french open. I was so scared for her this time because I know Maria wants to use her and shine again but Serena showed her the stuffs she is made of. No be today!

Two hours before her French Open final, Serena Williams practiced on center court, the stands deserted as she whacked one winner after another to the distant sounds of a brass band playing on the plaza.
When the music stopped, the seats filled and the match began, Williams went on defense, relentlessly chasing down one shot after another to defeat familiar foil Maria Sharapova. With a 6-4, 6-4 victory, the No. 1-ranked Williams won her first French Open championship since 2002.
"Eleven years," Williams said in French during the trophy ceremony. "I think it's unbelievable. Now I have 16 Grand Slam titles. It's difficult for me to speak because I'm so excited."
Then the national anthem played for the first American singles champion at Roland Garros since Williams' previous title.
Williams whacked 10 aces, including three in the final game, and the last came on match point at 123 mph — her hardest serve of the day. She then sank to her knees, screamed at the sky and buried her face in the clay.

The victory completed her rebound from a shocking loss to 111th-ranked Virginie Razzano in the first round at the French Open a year ago. Since that defeat she's 74-3, including titles at Wimbledon, the U.S. Open, the London Olympics and the season-ending WTA Championships.
Both finalists swung with their typical aggressiveness from the baseline, but Williams' superior serve and defense proved the difference. She silently ran side to side whipping groundstrokes with little apparent strain, while Sharapova often found herself lunging after the ball to stay in the point, with each shot accompanied by her familiar shriek.
When Williams once summoned a grunt herself to match Sharapova's volume and pound a winner, the crowd responded with a laugh.
Sharapova completed a career Grand Slam by winning Roland Garros last year, but she's still looking for a breakthrough against Williams, who has won their past 13 meetings since 2004.
"I played a great tournament and I ran into a really tough champion today," Sharapova said.
Lately Williams beats everyone. She extended her career-best winning streak to 31 matches.
At 31, she became the oldest woman to win a major title since Martina Navratilova at Wimbledon in 1990 at age 33. Her 11-year gap between Roland Garros titles is the longest for any woman.
- June 08, 2013