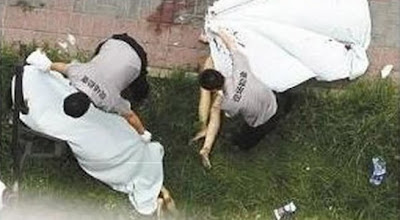 This is terrible… The tragic pair were believed to have been making love in an apartment block in China when the window shattered in the throes of passion.
The man and woman then plunged to their deaths on the pavement below.Horrified witnesses told China media that the couple held onto each other tightly as they fell.
Shocking pictures emerged which claimed to show the couple lying on the pavement.Chinese officials can be seen covering the bodies with sheets.One report suggested the lovers chose to have s3x by the window to keep cool during the hot weather in the city of Wuhan.Others suggested the windows in the apartment block were of poor quality
- June 29, 2013