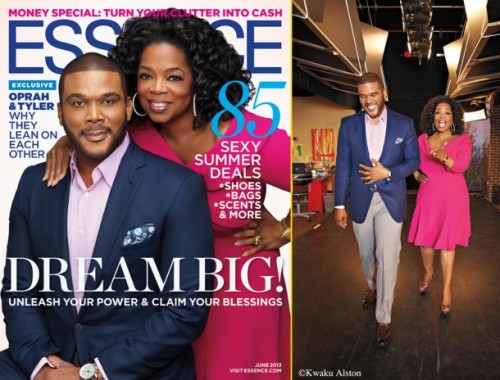 In the June 2013 issue of ESSENCE magazine, cover stars Winfrey and Tyler Perry describe the ways they've helped and inspired each other through the years — a friendship and partnership that has culminated in a TV deal giving Winfrey exclusive rights to broadcast all the original shows written, directed and produced by Perry this year and ever after.

On mixing their friendship with business, Perry adds, “…The most important thing about coming together was making sure we would not lose our friendship because of the business. We had to establish ground rules. The main one: Both of us have to continue to live in our truth. If she doesn’t like something, say it. If I don’t like something, I’ll say it. And we’ll figure it out and keep moving on…”

For Perry, working with Oprah on new OWN shows like the drama The Haves and the Have Nots (premiering May 28) and the sitcom Love Thy Neighbor (May 29) “challenged me to push myself in terms of my writing and level of thinking,” he says. “I’m hoping that the energy of our coming together will go out to other people.”
- May 03, 2013